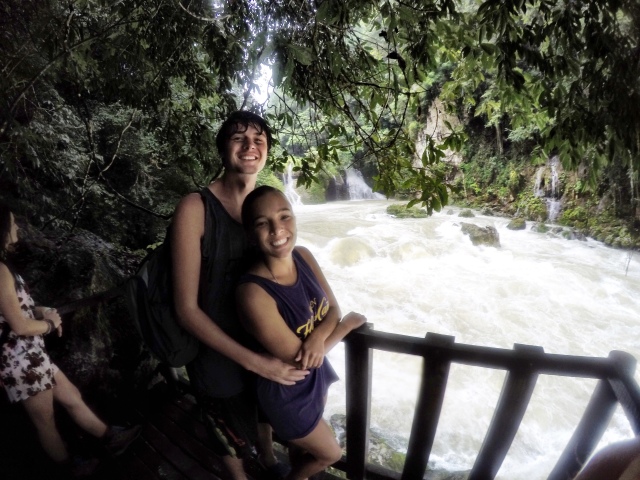 Nothing says adventure like a day at Semuc Champey *smiles at rhyming skills*. After spending a few days lounging in Antigua, Guatemala, actually it was more like pouting over the fact that I could NOT do anything because I had a severe staph infection and therefore was not allowed to sweat. No sweating in Central America, that’s a funny joke. Also, I couldn’t shave my armpits for three weeks it was so disgusting. I couldn’t decide if it was worse to tell people “oh yeah I have a staph infection and can’t shave my armpits” or just let them think I didn’t shave them by choice. It’s also why there is not post about us epically climbing to the top of Mount Acatenango and watching Fuego erupt while Eli and I marveled at how awesome we were for making it to the top even though I cried that it was too hard more than a few times. We spent our days meandering through the cobblestone streets and spending way too much money in the indigenous market. Though I did launch a rebellion and we did climb to the top of Cerro de la Cruz. I will not be held back!!

Okay end rant now. Anyways! Eli and I hopped on a shuttle heading towards the glorious Semuc Champey. All we knew about it was what we had seen in pictures, but with it’s turquoise pools surrounded by lush forest glorious is the only way to describe it. Plus it looked like a mermaid lagoon so naturally I was immediately sold. After our supposedly 8 hour shuttle that turned into more of a 12 hour shuttle thanks to the fantastic roads in Guatemala and our shuttle breaking down in the middle of nowhere we made it to our hostel El Retiro. El Retiro was an awesome hostel located next to the river, with grass roof huts, swaying hammocks, and spanish music playing from the bar. Though they advertise that there is wifi this is a half truth. There is wifi but you have to pay for it so being the cheap person I am that means no wifi but it’s really nice to just disconnect for a few days and enjoy the jungle’s calm. A warning my fellow sweet blooded friends, you will get eaten alive here so bring the heavy duty stuff. Another downside is that they don’t have a kitchen and their food is pretty spendy. But, it’s a really cool place to stay if you are looking for a cool hostel in a different setting.

The day of our tour we woke up bright and I debated for about half an hour on what to wear, then I asked the other girls what they were going to wear, and then I got dressed. We headed into to town because I was not about to spend hours in to the water in my birks – they were my only shoes and I didn’t want to risk them falling apart. At the beginning of our trip Eli ditched his mud stained and ripped shoes in favor for a cheap pair of crocs. I had made fun of him every day since for his goofy choice in shoes but he swears by them so I was about to join the team. Three dollars later I had my first pair of squeaky black crocs. And let me tell you something. My crocs were the MVP of the day. There were super comfortable, didn’t spill, stayed on the whole time and were super lightweight which was so helpful when trying to swim with one hand through a cave while concentrating on not putting out my candle. So after my best purchase ever, okay that might be an exaggeration, we headed back to the hostel and hopped in the back off the truck headed to Semuc Champey. After bumping along and rolling over crazy steep hills we made it to the entrance of the cave. Before arriving I was so excited but after hearing the safety speech about how dark it is and people who are claustrophobic I  got a little nervous thinking that we would be crawling through tiny spaces. It was not like this at all.

It was one of my favorite days on this trip.

I flipped my crocs from “slip on” to “secure” and we lit our candles climbing behind others to the entrance of the cave. We gasped as we entered the cave the water immediately coming up to my waist. It was pitch black aside from the line of candles and the few feet radius of light they provided. It was so peaceful and romantic. After a minute or two of sloshing through the water we were stopped by our guide who was rubbing the stalagmite. He then began to ornate our faces with guano designs. I could practically hear my grandmother screeching from her grave about how unsanitary it was and to be honestly it is pretty disgusting. But also a once in a life time experience. My “face paint” was a cat so obviously it was the best. Next up was Eli who got some war paint and then we were on our way. We hiked over rapids, swam through dark caverns, walked under waterfalls, and slid down rocks – all the while attempting to keep our candles lit. Eli had it easy being so tall and was able to walk through the deep water while everyone else was swimming. So naturally I held on while he dragged me through and I concentrated on keeping our candles protected. Though I did dunk my candle a few times while attempting not to drown, I would like to say that it was blazing beautifully when we emerged from the cave.

Before the bat poop face paint 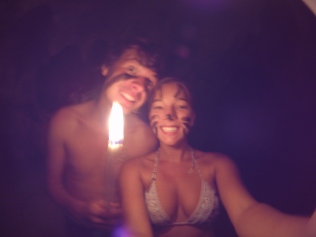 Up next was the rope swing. I will admit that I didn’t participate. I’m not a very coordinated person and therefore I did not trust myself to jump from the sitting position on the swing at the perfect time. I just knew it was going to end badly. So I cheered Eli on while he swung out and landed as gracefully as possible when flinging oneself into the water from a sitting position. We then wandered down the river and picked up tubes for floating. Two little boys Ronaldo and Freddy materialized out of no where with coolers of beer. “You buy from me, my friend” Ronaldo explained while Freddy persistently asked others if they wanted a beer. And when I saw they were persistent I mean PERSISTENT, as in asking if people wanted a beer every two minutes and floating down with us. I didn’t like this situation. It makes me sad to see kids not in school and I don’t feel comfortable buying alcohol from them especially when they should be getting an education or playing outside. As I began to climb into my tube Eli patted my shoulder and explained that he was going to float the big rapids with one of the guides and pointed to HUGE rapids in the distance. After a short, very mellow float we met at the river bank Eli enthusiastically exclaiming how awesome the rapids were. The only thing he could equate the experience to was slowly swimming into and subsequently getting shot out of the East Australian current, much like Nemo.

After the bridge jump we had lunch and the hopped in the back of the truck and headed to Semuc Champey. Once arriving we switched guides, ours were not allowed in the park, and became to climb to the mirador. We hiked up slippery muddy stairs while getting pelted with rain and I quietly prayed that I wouldn’t eat it. The view at the top was breathtaking.

After making our way down the treacherous trail we had arrived at the turquoise waters of a real life mermaid lagoon. We quickly stripped into our swim suits and half slid, half flung ourselves in. The water was the perfect temperature and crystal clear. We spent the next few hours floating around and taking in the beauty around us. We swam over to a group of girls pearched on rocks letting the little fish eat the dead skin off their feet. First off overly friendly fish freak me out. I know this fear is totally irrational. Overly friendly fish that liked to nip at my feet – this I did not like at all. I tried to steer clear of the shallow bits but couldn’t help yelping when the got the occasional nip in. I know people pay money for this, which I think is insane, but I just couldn’t like it. Thinking about it gives me the shivers. Nipping fish, no thank you! Minus these little guys it was amazing splashing in the warm waters of Semuc Champey and I hope to return to it’s mermaid waters again one day. Another rhyme for the tallies!

Thanks for reading and don’t forget to check out my Instagram!